skip to main | skip to sidebar

What Is Left Behind

It seems a long time ago now that Dana, then the Secretary, asked me if I would take on the blog as part of my responsibilities as ino. She is gone now, back to the market-place; there is a new Abbess, a new tanto, and everyone else on the senior staff that I started with has rotated to a different job in this period of time. That is the way of things at Zen Center.

This morning I put on my robes and went down to the zendo for the first time this week. Even though the schedule was optional for residents this morning, we had a good turn-out for the Full Moon Ceremony in the Buddha Hall after zazen. I had asked Martha several times before to be kokyo, and it had never worked out, so I was glad that she made her debut this time, for the blue moon; her voice sang out across the room strongly and vividly.
I sat one last time in the ino's seat for the 9:25 period - I was going to say, enjoying sitting with all the Saturday regulars, but actually there were a number of new faces today; perhaps some of these are going to be the new regulars.
Rosalie had told me she was going to get up at the end of lecture to say something about it being my last day, and she did - apparently it went out on the Livestream as well if you want to hear what she said. I have noticed before that she always has a good knack of finding the right things to say about people, pinpointing particular qualities that stand out and bringing them to light. My karma is such that I found it more embarrassing to be standing there on the receiving end of these glowing words than just to be there making anouncements, but I felt warmly held and appreciated by everyone in the room; there was also applause, which is most unusual in those surroundings.
As happens most Saturdays, a nice group from YUZ got to hang out in the courtyard afterwards, partly organising what we are going to do on Monday, and, since I was getting into a vacation frame of mind and had the intention of not planning anything for today, I lingered with everybody after lunch much longer than is my wont, and had a sweet time with people.

There is a ceremony in one of the folders on the computer for the ino transition, which we have sometimes used; mostly it is a jundo and an invitation for the new ino to take the seat. The timing being what it is, I don't think we are going to do it this time. I will however make a transition right here after I have posted this: I will transfer the administrative control for the blog away from my log-in, and leave it in Valorie's hands.

I would like to say that I have deeply valued being offered this space to express and share the dharma and my practice with everybody, and I have been constantly encouraged and touched by all the positive feedback I have received over the last two and a half years, be it from my closest dharma friends here in the building or those of you with whom I am only acquainted through the blog. It has been a particular and wonderful sangha to have been a part of.

At times, and not just now at the end of my tenure, I have looked around and thought that the most tangible result of my time as ino will be that I got the bowing mat in the Buddha Hall replaced. It took more than a year to actually make it happen, but then I think it had been in need of doing for at least ten years. There are a few other material things that I can look around and think, I was at least partially the cause of this coming into being. For the non-tangible effects...

The truth is that I have been trying to compose this post for a couple of weeks - which would explain why it reads a little disjointed - and I know that it is impossible to be able to find fitting words to say at this moment. However, having read in Living by Vow an extract from Shobogenzo Gyoji, I think it is only appropriate to close with some words from Dogen:
"The essential point is that, in the entire earth and throughout heaven in the ten directions, all beings receive the merit of our continuous practice. Although neither others nor ourselves know it, that is the way it is." 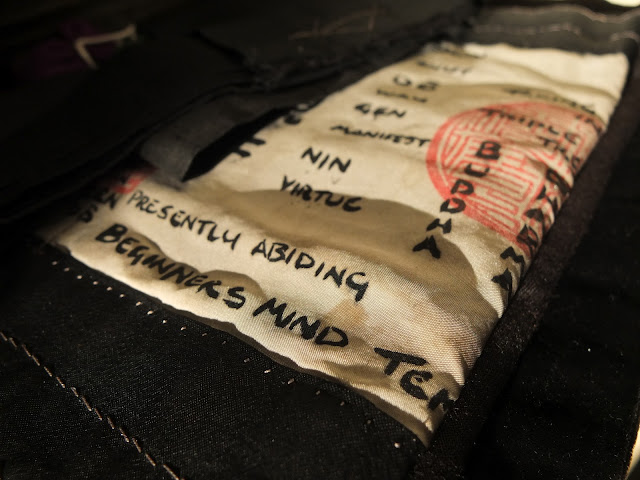 Thank you and good bye.

Thank you is not enough, goodbye is too much. Deeply bowing, Susan O

I've enjoyed the blog so much over the past two years, Shundo, you know that. It's been a great pleasure and yo've done a very fine job.

I wish Valorie all the best with its future.